Catharine C. Bean July 1, 2022 Shirt painting Comments Off on The REPEAT offenders who superimposed themselves on Van Gogh’s painting 8 Views

The eco-zealots who glued themselves to the frame of Vincent Van Gogh’s painting Peach Trees in Blossom yesterday are repeat offenders who have taken part in a series of other protests.

John Lennon lookalike Louis McKechnie is best known for tying himself to a goal post during a football match between Everton and Newcastle in March.

The 21-year-old stormed the pitch halfway through the Premier League clash and tied himself to the woodwork in a bright orange t-shirt saying: ‘Just stop the oil.

McKechnie halted play for seven minutes before stadium staff freed him with a huge pair of bolt cutters and pulled him off the field where he was stopped.

He was also accused of daubing the Queen Victoria Memorial in red paint as part of an Animal Rebellion protest and blocking access to oil terminals in Essex.

He was joined at Just Stop Oil’s latest stunt at London’s Courtauld Gallery on Thursday by psychology student Emily Brocklebank.

She has also been spotted at previous environmental protests, including the group’s action at Kingsbury Oil Terminal, as well as an Insulate Britain protest on the M25 in Hertfordshire last year.

Met Police have confirmed that two people have been arrested on charges of criminal damage following yesterday’s incident at Somerset House and the couple are still in custody. 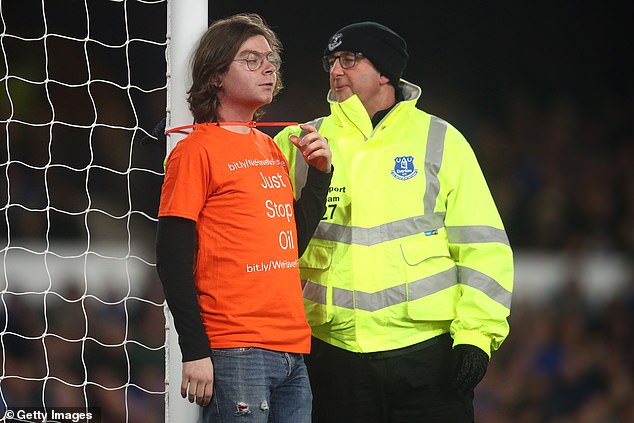 Louis McKechnie, who has been named as one of the protesters, is an eco-zealot who tied himself to a goal post during Everton’s football game against Newcastle in March. 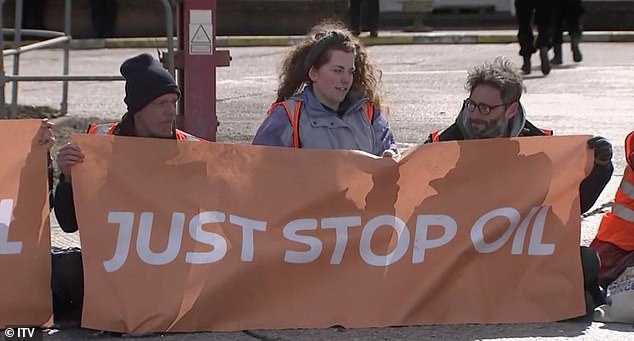 Fellow protester Emily Brocklebank (middle) has also been spotted at previous environmental protests, including the group’s sit-down action at the Kingsbury Oil Terminal.

Yesterday’s stunt came just 24 hours after protesters glued themselves to the 19th century painting My Heart Is In The Highlands by Horatio McCulloch at the Kelvingrove Art Gallery and spray-painted their logo on walls and the floor of the building.

Five people have been arrested and are due to appear in Glasgow Sheriff’s Court.

The latest action comes amid warnings that the Provence region in southeastern France, depicted in Van Gogh’s peach tree painting, could soon experience drought after precipitation levels were 45% below historical averages.

Just Stop Oil, which has previously staged protests at oil terminals and UK government offices in Edinburgh, said it was calling on arts institutions to join the group in “civil resistance” against climate change.

McKechnie, from Weymouth in Dorset, said: ‘As a child I loved this painting, my father took me to see it when we visited London. I still love this painting, but I love my friends and family more, I love nature more. I value the future survival of my generation more than my public reputation.

“Scientists are saying we need to end fossil fuel licensing and the government is pouring sand in their ears. I don’t want to be driven to my death by the fossil fuel companies and their government puppets.

“It is immoral for cultural institutions to sit idly by and watch as our society crumbles. The galleries must close. Directors of arts institutions should call on the government to immediately halt all new oil and gas projects. Either we are in resistance, or we are accomplices. 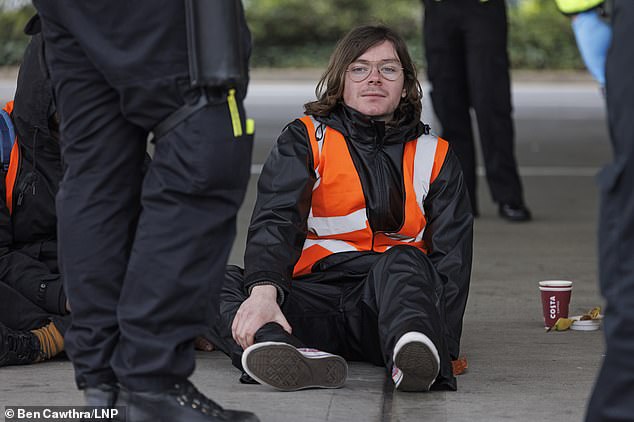 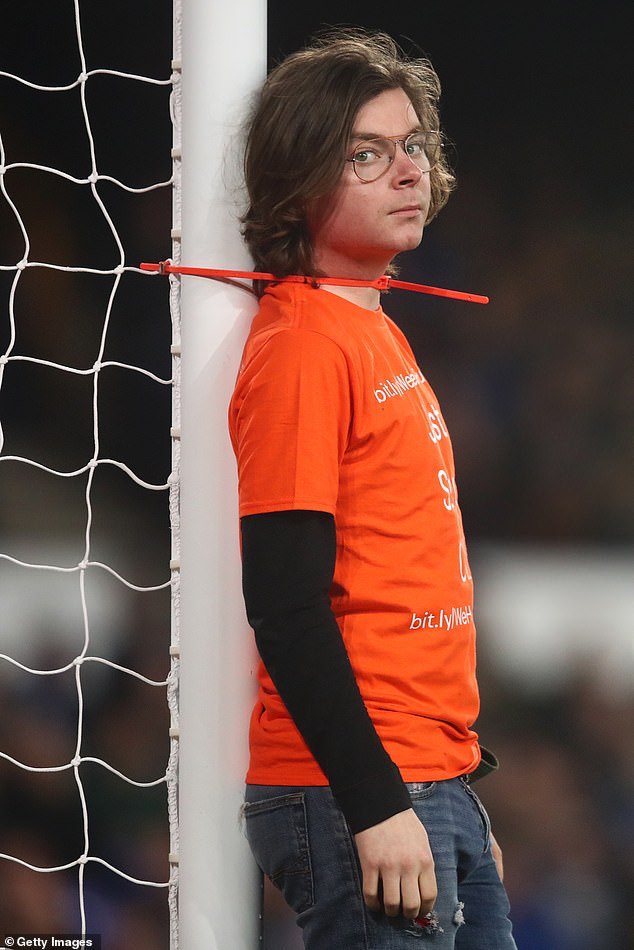 McKechnie halted play for seven minutes before stadium staff freed him with a huge pair of bolt cutters and pulled him off the pitch where he was stopped. 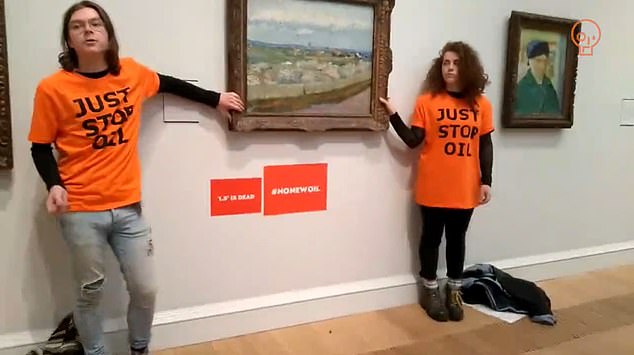 The second protester at the gallery was Emily Brocklebank, 24, a psychology student from Leeds.

She added: ‘I am taking action today because I cannot live in a bubble of normalcy as society collapses around us and people in the south suffer so much.

“Billionaires are getting richer while nurses line up at food banks, tens of millions of people around the world are starving, and half of the world’s population is in extreme danger from heat waves, floods, fires and famine. Meanwhile, the arts establishment, politicians and fossil fuel companies look the other way.

“I love art, everywhere I go, I visit all the galleries. Art is so important, it captures history and a moment in time, but artists and the art establishment fail us by focusing on the wrong things. We need everyone to focus on the government’s genocidal plans to allow fossil fuel companies to drill for more oil. It is one of the greatest injustices in history. We must resist.

A Met Police spokesperson said: “At 3.32pm on Thursday June 30, police were called to Somerset House, WC2 after two protesters stuck to a picture frame.

“Officers attended and arrested a man and a woman for criminal damage.

“Specialized officers worked to ensure their quick and safe removal and they were taken into custody.

“No injuries were reported.” 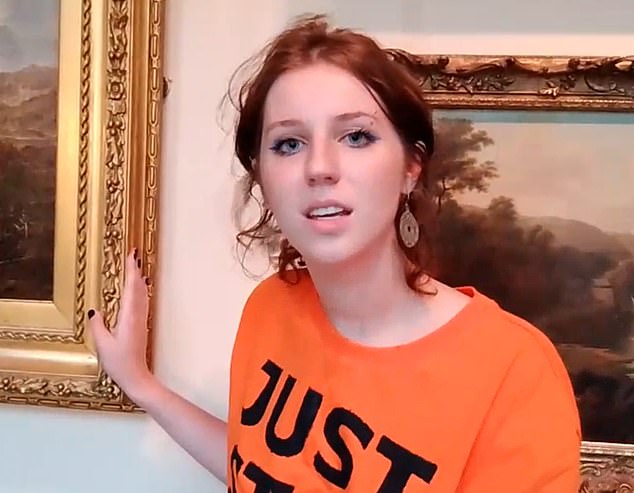 The stunt comes just a day after protesters stuck to the 19th century painting My Heart Is In The Highlands by Horatio McCulloch at the Kelvingrove Art Gallery and spray-painted their logo on the walls and floor of the building . Pictured: Hannah Torrance Bright, 20, attached to the portrait yesterday

Despite his age, McKechnie is a seasoned disruptor who has wreaked havoc in recent months with the Insulate Britain protests on major UK roads.

The mechanical engineering student was one of nine protesters dragged to the High Court for breaching a government injunction preventing thugs from sticking to roadways, including the M25 last year.

The thug was locked up for three months at HMP Thameside but on his release after half that time he boasted he was ‘terrified’ but was greeted by other stragglers who he said were “entertained” by his protests.

He told LBC in January: “My experience in prison has encouraged me to take any future action, whether or not prison is the result.”

He continued, “I think if we could save those 8,000 to 30,000 lives that are lost every year to energy poverty, I would spend the rest of my life in jail for it.”

He added: “I see the only way these protests will stop is when our demands are met. When the government acts on the climate crisis, acts on energy poverty and stands up for its own people.