A pensioner who was fined £130 after painting a zebra crossing on a busy road outside his home has claimed his local council took 18 months to paint its own markings – and they are not as good as his own DIY efforts.

Laurie Phillips painted six white rectangular blocks on the road he and his disabled wife struggled to cross outside their home in the picturesque village of Mudeford, Dorset, in August 2020.

The 79-year-old man was fed up with his repeated requests to install a passage near his home that remained unanswered by city hall officials.

The retired psychotherapist got up at 5 a.m. and spent several hours putting the markings on a fallen pavement, only to be carried away four days later by council staff.

Mr Phillips was summoned for an interview with police over allegations of criminal damage and was eventually fined £130 for the ordeal.

But 18 months after its first complaints, Bournemouth, Christchurch and Poole (BCP) council painted its own three ‘slow’ signs on the road.

Mr Phillips says their signs are less effective than his homemade zebra crossing because they are not as visible and most motorists ‘ignore’ them.

He insists his makeshift crossing, along with his fake 10mph sign and illusory speed ramps, have all been respected by motorists who have stopped to let people cross, making the area “considerably safer “for pedestrians.

“It’s just ironic that they took away the signs I made, saying they weren’t needed, and 18 months later they’re now painting their own signs,” he explained.

“I think I did a better job the first time – my marks were wider and took up more of the road.”

Pensioner Laurie Phillips, pictured, who was fined £130 after painting a zebra crossing on a busy road outside her home, claimed her local council took 18 months to paint its own brands – and they’re not as good as its own DIY efforts 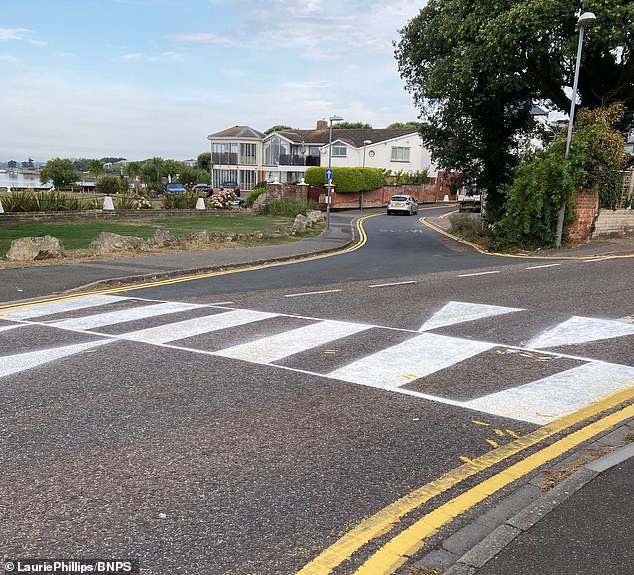 Retired psychotherapist Mr Phillips, 79, bought white paint and drew these rectangles on the road which he says are traveled by 5,000 cars a day. 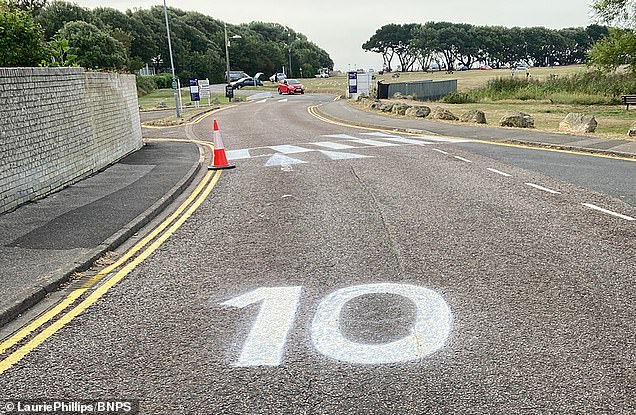 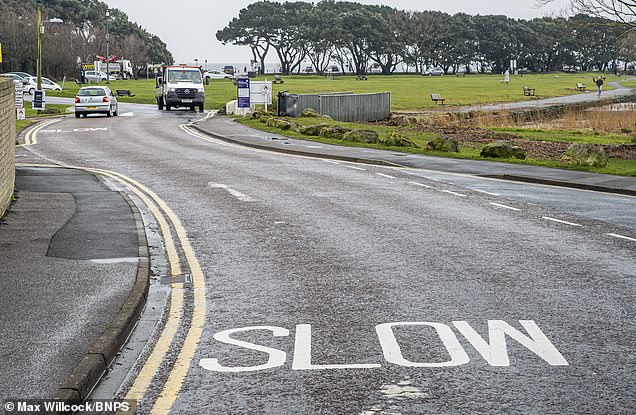 The road in question leads to Mudeford Quay, which is a popular beauty spot with visitors and up to 5,000 cars a day use the road.

Mr Phillips’ crossing was in place for four days and was respected by traffic stopping to let people through, making it ‘considerably safer’ for his wife Estelle, elderly residents and families with young children.

But council workers then came to wash off the markings and Laurie was reported to the police for ‘criminal damage’.

Mr Phillips called the police investigation an “unnecessary waste of police time” which had caused him “unnecessary stress”.

He said all he cared about was getting a permanent crossing installed there to improve pedestrian safety.

“Now there are three slow painted signs on the road that look like what I put up in the first place.

“It’s just ironic that they took away the signs I made, saying they weren’t needed, and 18 months later they are now painting their own signs.

“It’s better than nothing, but not much better, because almost all cars still don’t slow down. 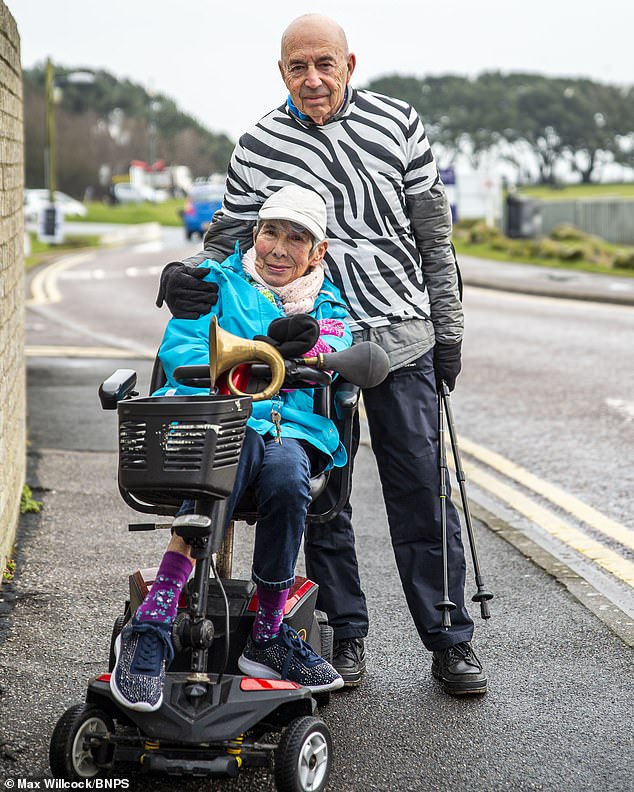 Pensioner Laurie Phillips painted six rectangular blocks white on the road he and his disabled wife struggled to cross outside their home in the picturesque village of Mudeford, Dorset, in August 2020. He is pictured above with his wife Estelle, 77 years old. 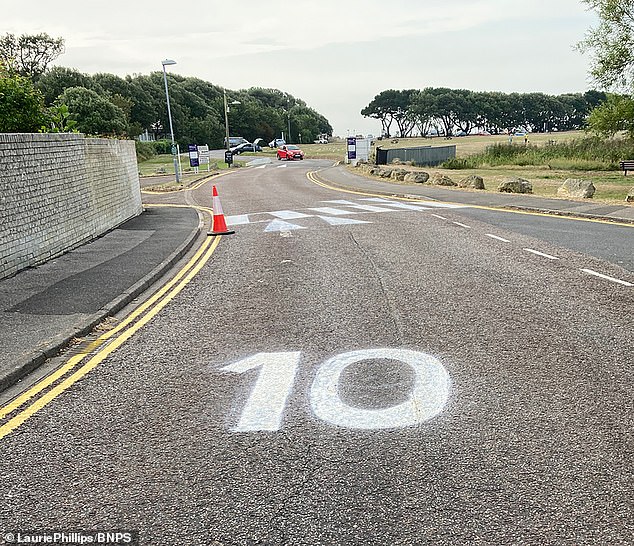 Mr Phillips claimed the council had failed in its duty to consider disabled people in the area who would benefit from a zebra crossing. Pictured: Her DIY efforts from 2020 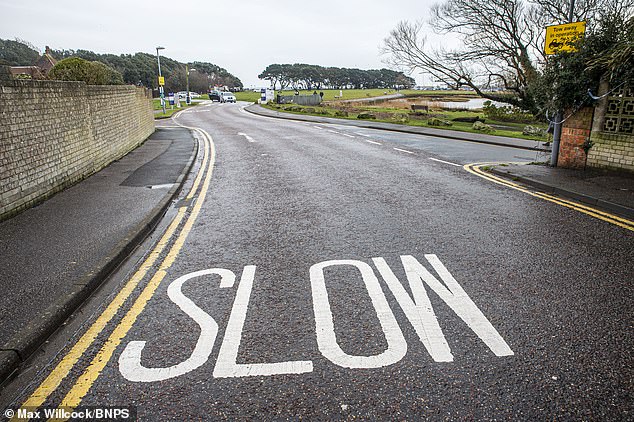 “Not many people will reduce their speed for a slow sign, they will only do so if there is a speed limit change or a speed camera.

“They haven’t put up any electronic signs to let people know how many parking spaces are available on the platform and when the car park is full.

“This would be useful, especially in the summer months, as it would stop the endless lines of cars idling while waiting for a parking space.

“They have to put slow signs on the main road and people come tearing along that road, especially in the evening.”

He added: “Looking back at how I was treated after the temporary zebra crossing, the advice was very harsh, it was an overreaction and it could have been handled much more sensibly.”

“The prosecution has been a complete waste of valuable police time, as well as unnecessary stress due to numerous delays in the process for me and my wife.” 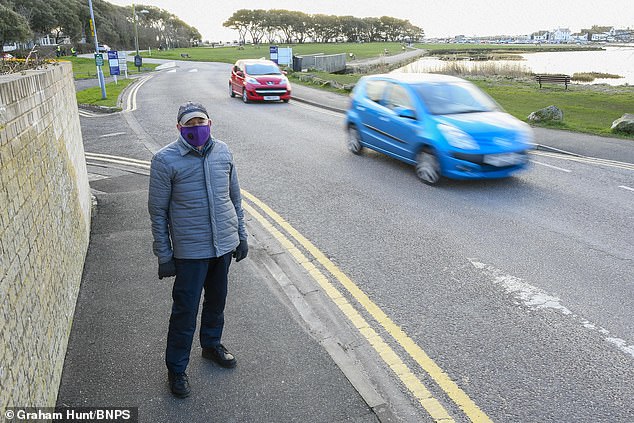 Mr Phillips, pictured, claims up to 5,000 cars a day use the road outside his home in the beauty spot of Mudeford, Dorset 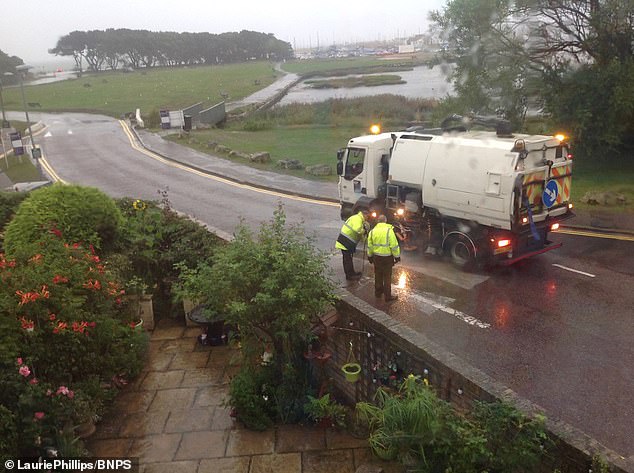 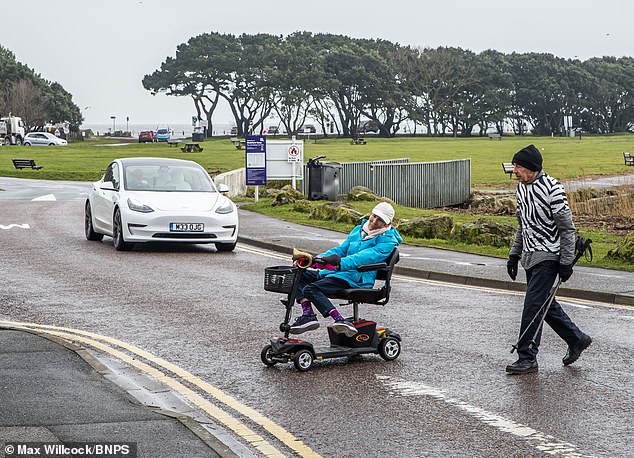 Mr Phillips alleged his 77-year-old wife Estelle, who uses a mobility scooter (pictured above) and other disabled residents were discriminated against under the Equality Act 2010

Mr Phillips, who started a 100-signature petition for a zebra crossing, was handed a community resolution order which he did not fight in court as it ‘wasn’t worth the trouble’.

He alleged his 77-year-old wife Estelle, who uses a mobility scooter, and other disabled residents were discriminated against under the Equality Act 2010.

The council said it had received a request to install a zebra crossing and will review the measure in the coming months.

A BCP Council spokesperson said: “The ‘slow’ line markings have been installed following discussions about what can be done to keep road users and pedestrians safe on Chichester Way.

“We are delighted that this has been achieved by our understudy team as this is still an active security measure while requests for passage are being reviewed.

“We can confirm that a crossing request has been submitted for this area. We have many requests to assess, but we are aiming to conduct a site visit in the coming months around April or May.

“By ‘assess’ we mean visiting the site for a number of hours physically counting all vehicular traffic and pedestrians passing through. We need to make these assessments at the busiest time possible, which means we will make our visit here when we expect warmer weather and more visitors.