Helen Parsons showed wit when she named her Instagram account Helen Parsons Project, but she will soon have something in common with 70s British band The Alain Parson Project. She is going to be famous, at least for fans of textile arts. And that won’t surprise those in the Inland Northwest already familiar with his work.

In July, Parsons and his partner, James Barrett, traveled to Colorado to film three episodes for Quilting Arts TV. The long-running show, which airs on PBS’s CreateTV channel and reaches approximately 80 million US households, will begin airing episodes featuring Parsons in mid-October.

“If you’re a fiber artist, you definitely know this show,” says Parsons, who has been a fan for Quilting Arts TV launched in 2007.

However, his 15+ minute glory almost didn’t happen. Unsurprisingly, Parsons was skeptical of the unsolicited email she received in February 2022 from the show’s co-host Vivika Hansen DeNegre. Parsons was also unaware that a friend had approached the show’s producers on his behalf.

“I definitely felt a bit like an outsider,” says the autodidact Parsons, whose approach to technique and subject matter was not what she’d seen on the show.

In addition to not being a quilter, Parsons content tends towards more contemporary themes.

This actually intrigued the show’s producers.

“Every season of Quilting Arts TV has a unique ‘personality’ and Helen’s artwork helped set the tone for this series,” says DeNegre, who is also the editor of quilting arts magazine. “His work is special and varied: some are eccentric and quirky on the surface, but have hidden messages for the viewer to discover.”

Some of Parsons’ techniques are also unorthodox, such as what she calls “Impressionist fabric painting.”

After developing an outline design and selecting a color palette, Parsons draws from his considerable supply of fabric, which is neatly stacked and organized by color in his modest South Hill studio. Next, she begins the laborious process of cutting out strips of fabric, which look like a drop of paint when stacked on the table. Parsons will lay out this “paint” on a water-soluble fabric substructure according to the design plan, optionally sewing the composition by machine. Finally, Parsons immerses the image in water to dissolve the substructure and embellishes the piece with more stitching, appliques, etc.

The resulting piece is flat, like a painting, but textured and obviously made of fabric, which has always been considered an artisanal medium.

“All of her pieces combine a painter’s perspective with an art quilter’s love of texture and stitch,” observes DeNegre.

They were excited, she adds, to see Parsons’ work in person and learn more about his journey as an artist.

Ssince arriving in Spokane in 2001Parsons continued to explore recurring themes: nostalgia, sense of place, the passage of time, the nature of seeing and knowing.

She is particularly drawn to the culture of graffiti, for example.

“It’s that way of saying, ‘I’m here, I matter,'” Parsons explains. She also likes the color, the vintage, the plurality of it, a readable message or not.

“That’s one of the things I like about graffiti artists, it’s often that they hide little things on them or it’s so busy that you really have to concentrate,” she adds. .

Many of Parsons’ Impressionist fabric paintings attempt to recapture a sense of place, such as the wooded area behind the school in Virginia where she also ran across the country as a high school student.

“Maybe it’s the runner’s high everyone is talking about, but I felt like at some point I wasn’t tired,” Parsons said of her youth. long-distance running. “And I was almost levitating.” 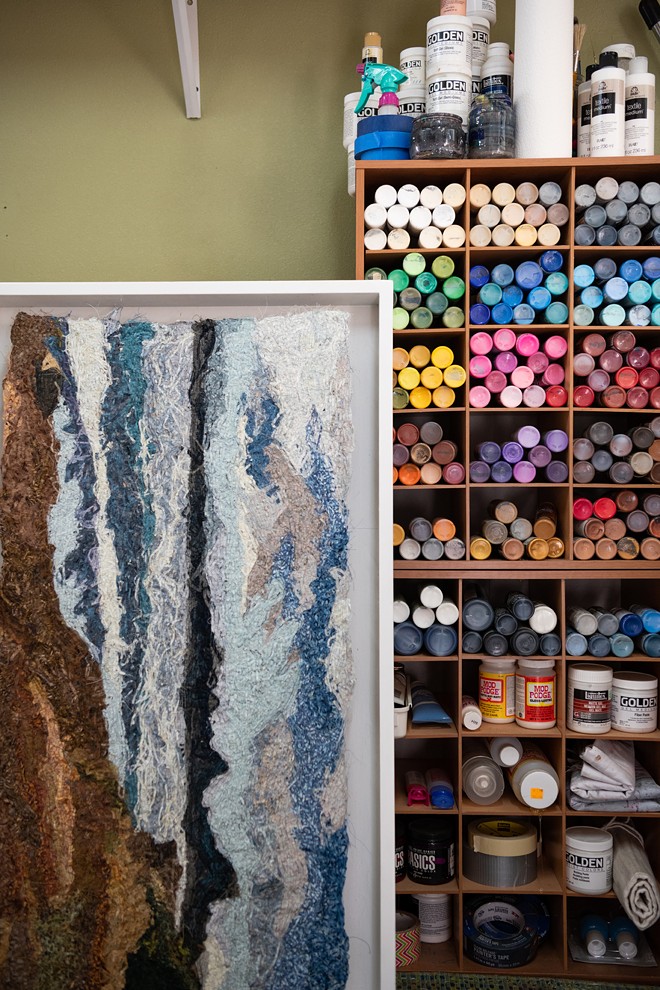 Compare this happy moment with nine years ago, when Parsons was diagnosed with an autoimmune disease. But rather than back down, Parsons leaned into life, spiking exhibitions across the city: New Moon Art Gallery, the recently closed Object Space, and Terrain, including its innovative Window Dressing program.

“The appeal” gets people interested in the site, Parsons says, but the real benefit is the community.

The site continues to grow and has since evolved into a forum for sharing resources, questions and content. Parsons wants to “level the playing field” for artists who might not have access to representation, resources, or the kinds of things one might have learned in art school.

Parsons sees her advocacy as a natural extension of her artistic creation.

“Sometimes I feel like this scientist who dissects humanity and dissects myself and my feelings about the world and my place in it by creating [my artwork]”, Parsons says. “And I don’t know if that makes sense to anyone else, but it makes sense to me.”

Since returning home from taping the show, Parsons has embarked on new endeavors, including being part of the Northwest Museum of Arts and Culture’s annual artist studio tour in December.

“The show is definitely a milestone, but basically for me as an artist, I’m the happiest when I’m just doing art.” ♦